One thing we love about having a brick-and-mortar our business can call home is getting to build relationships with our community, and celebrating all of the different stories customers bring in with them.

As Black History Month 2019 draws to a close, we recognize that black history is American history. Today and every day of the year, we honor the black women and men who help make this community great.

We went for some coffee at our neighbor Pip’s Donuts, and sat down with one community member and customer who lights up any room he walks into. His name is Keith Johns.

Paperjam Press values diversity and treats everyone with the same respect no matter of their race, religion or sexual orientation. Please join us as we hear and honor Johns’ story!

Can you tell us a bit about your background?

I was born and raised in Seattle, the youngest of seven. My dad’s black, my mom’s white. My dad is the father of all of us but I’m the only one from my mom, so there are different moms involved. My mom raised us all so it’s like a mixed family. One of my sisters’ mom was Mexican. Another one Native American, another one black. So it was a really multicultural family growing up; with no money.

We had a two-bedroom, nine of us in a two bedroom. My sister slept on the couch. My mom and dad in one room and there was a bunk bed in the other room. My three brothers and I on the bottom. Three of my other sister at the top. I was the youngest so I got to sneak out and sleep with my parents.


When did you move from Washington to Oregon? What brought you here?

I moved to Oregon in 2000, to Eugene, Oregon, and I played Baseball there for a community college. I came to Portland in 2002, and I’ve been there ever since.

When I moved here I got a job at Safeway in three first weeks. I moved up into management, left after 5 years, and worked at Trader Joe’s for a year after that. Then I went into my father in laws painting business until the market crashed. That’s when I took the job at Franz and that’s the job that I only lasted 9 months at and decided to go to Respiratory Therapy school.

I got a job right out of school, at a foster home for kids with disabilities. These kids were on ventilators and trach tubes. I got to do a lot of one-on-one work, taking care of them and thinking of ways to get them to lead a somewhat normal life even though they have a ventilator and oxygen and suction machine.

I adapted, worked there for a year, then got a job at Norco as a respiratory therapist. That’s where I’ve been for five and a half years. What I do is maintain the relationship between Norco and all the hospital and doctor’s offices, and try to gain new referrals so we provide medical equipment. I enjoy it, a lot; I’m a people person. I like helping people and trying to improve systems. I like to make people happy, make people smile. 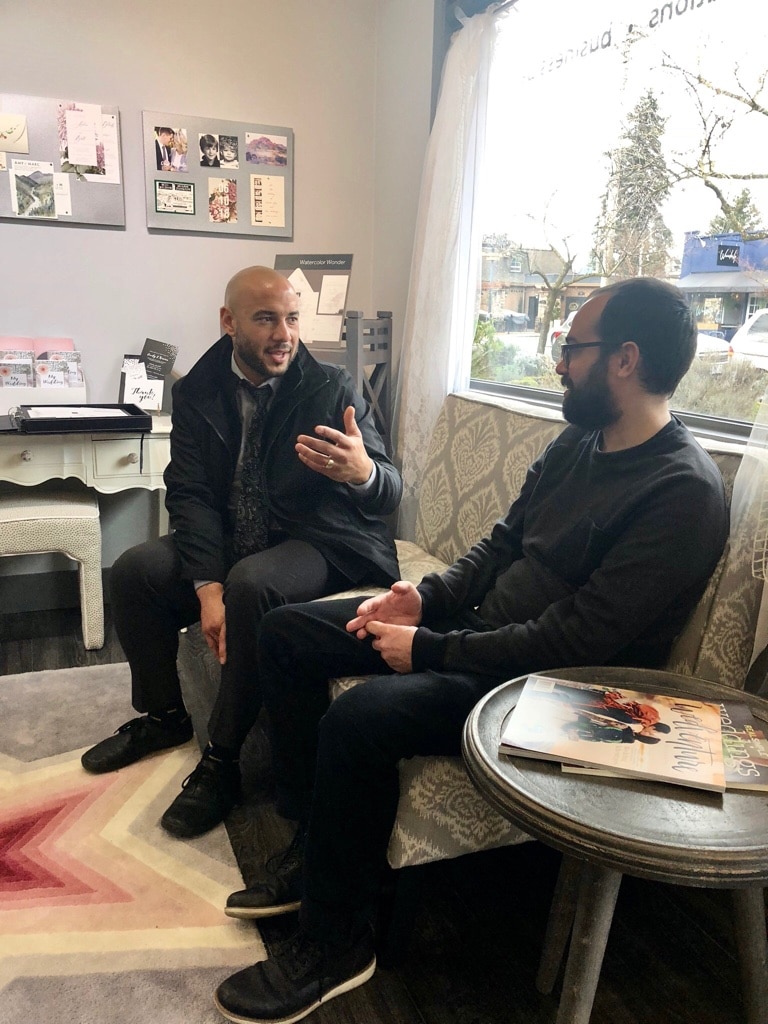 Who would you say has inspired you along the way?

Over five hundred people showed up to his memorial. that tells you what kind of person he was. My dad and I were very similar so we butted heads a lot. He taught me how to knock down that barrier, as far as being a black man. I have pictures on my phone from the seventies where my dad riding a bull or flying a plane scuba, you know my dad would do everything. And he treated everyone with respect and he could just relate to everyone because he was so open to doing everything.

He’s the complete opposite of any kind of stereotypical black person. Dad would make me be on time – like if you aren’t 15 minutes early, you’re late. Don’t live up the stereotype.  I don’t know if he did it do on purpose or that’s just how he was. He had to go through a lot of shit. That was his biggest thing..how to treat people. He was the hardest worker I’ve ever met in my life to a fault. You know sometimes my dad only made it to ten of my baseball games.. but he was working and supporting all these kids and making sure we had everything we needed.

You used us to create and print your memorial for your dad, as well as for a project with Norco.

So, I needed a brochure for work, and I did not want to use a national company, I prefer to go locally if I can. When you go into a local place most of the time it’s the owner you are talking to and they have this sense of ownership and that pride and they are going to do everything they can to help you and I just wanted to support a small company. My cousin who owns a small vape shop here in Portland, Rose City Vapors, he’s used them too.

Can you speak to being a black man in Portland, and in America?


I recently learned that when Black people spend money in the community with a black person or black-owned business, it stays in the community for only eight hours. With a white person, it’s thirty-two days or even months.

As a black man, I’m always kind of scared to go to the south, but I got down to Texas for example and everyone was actually awesome. I can tell when someone is feeling uneasy. My wife sees it too. I feel more comfortable when in my work clothes going into a store. it sucks. People treat me differently when I’m in my work clothes.

If I want to make a return without a receipt, it’s easier when I’m in my work clothes. She can when someone has an issue, and I’ve had multiple encounters like this. I try to do things to not make people look at me in that sense. Like I’m not going to steal anything. It sucks that I have to think about it.

Why do you choose to support local companies?

To keep the money in the community, to keep the doors open. I’m old school, I want to walk in and talk to someone. As much as I do use Amazon on some things, I’d rather go somewhere and talk to someone about it. I love customer service; I like relationships. That’s why I like small businesses. It’s a little bit more family oriented.

What are some of your favorite black-owned businesses here in Portland?

Portland has a lot of growing to do as far as in the black community. Portland’s not… Atlanta. Atlanta has a huge black population and out of that, there’s a lot of successful black people. There’s not that many successful black people in Portland. That’s probably due to that fact that the population is very small. I do love Pizza Yaki – a black lady from New York owns the business and it’s delicious pizza. I think there could be a lot more support in the community as far as marketing and just branding yourself. There are two vodka owned companies by black people I also enjoy – Miru Vodka and Parlae Vodka.

Make An Appointment
Get A Quote